Police officers who responded to the Jan. 6 riot at the U.S. Capitol refused to shake the hand of Senate Minority Leader Mitch McConnell (R-KY). 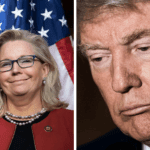