a professor has argued former President Donald Trump is the one to blame for the inflation in the U.S. right now.

Scott Galloway, author and clinical professor of marketing at the New York University Stern School of Business,   explained why TRUMP takes the blame ”on his tech and business podcast with Kara Swisher, Pivot.

the professor explained why on the “demand side,” he believes former President Donald Trump is to blame for the inflation in the U.S. right now.

“Yeah. So on a basic level, inflation is too many dollars facing too few products. And it’s important to remember that the reason we, the two primary drivers of inflation are that one in America there was a global coordinated quantitative easing and spending to create liquidity and ensure we didn’t have an economic crash,” professor Galloway said.

“Most countries put about 17 to 23% of their GDP to work. Trump put 27%. We overdid it. the professor said. “So there’s too many dollars out there. So if you were going to blame anyone for the demand side, it would be Donald Trump. The only nation that spend more as a percentage of their GDP on stimulus was Singapore.”

“Inflation in the U.S. is less bad than it is in most places. And it’s just a little bit sophomoric intellectually to blame Biden for inflation right now,” he continued, adding:

“And then on the supply side, we have to make big investments because just as nine women can have a baby in a month, you can’t build a semiconductor plan overnight. But my prediction and I’ve said this, I think inflation is going to come down faster than anyone thinks, especially in the US. The dollar is incredibly strong, which takes all of our.” he ended. 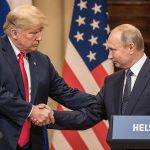