outgoing House Speaker Nancy Pelosi and Senate Majority Leader Chuck Schumer come together in their first-ever joint sit-down interview over lunch at Hunan Dynasty, a Chinese restaurant where the two have shared meals for years.

Schumer and Pelosi reminisced in the interview about past battles with Donald Trump – and both predicted the former president will lose his third bid for the White House.

“The American people have gotten wise to him. Took a little while, but they did,” Schumer said. 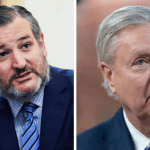 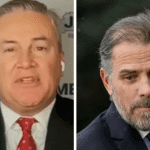