Former Rep. Lou Barletta (R-PA) announced he will not support former President Donald Trump’s third White House bid due to a lack of “loyalty” from Trump.

Barletta was one of Trump’s earliest allies in 2016 in the House and he co-chaired Trump’s 2016 campaign in Pennsylvania.

Sunday, he cut all ties to Trump due to the former president being disloyal to his supporters in congress.

“I’m not supporting him,” Barletta said. “I was one of his most loyal supporters in Congress. But loyalty was only a one-way street.”

Barletta called out Trump on the campaign trail earlier this year for turning his back on him.

Another former Republican Pennsylvania congressman Former Rep. Tom Marino (R-PA) asked, “Where in the hell is the loyalty?!” \

“Lou and I were the first congressmen to come out and endorse Trump in his first election. We took a lot of heat about it,” Marino added. “I’m very disappointed in the former president. Because apparently, the loyalty does not go as far as he says.” 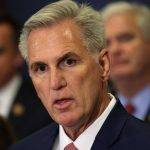