Liz Cheney, the Republican who voted to impeach Trump after the Jan.6 attack could overtake Kevin McCarthy to become House speaker.

some Democratic members of the house are considering nominating departing member Liz Cheney for speaker. The Constitution does not require the speaker to be an incumbent member of the House of Representatives, although every speaker thus far has been.

That uncertainty has one of McCarthy’s Republican backers, Rep. Don Bacon of Nebraska, holding out the prospect that he would be willing to reach across to the dems to elect a speaker if his fellow Republicans don’t unite behind McCarthy or another candidate.

“If we have total gridlock, I’m going to work with like-minded people across the aisle to find someone agreeable for speaker,” Bacon said. “We have to govern. We can’t afford to let our country be stuck in neutral.”

Republicans are set to take control of the House with four more seats than Dems — There is absolutely nothing in the world to prevent Democrats from nominating Liz Cheney (R-WY) — who lost her seat in Wyoming for speaking out against Donald Trump.

The Constitution does not require the speaker to be an incumbent member of the House of Representatives, although every speaker thus far has been.

Republicans will have a majority in the House come January, and therefore will have the opportunity to elect the speaker. the good news for Liz is that Voting for House speaker doesn’t require the 218 votes we all thought, giving her the chance to overtake Kevin McCarthy and become the House speaker with the party’s majority shaping up to be remarkably narrow, losing five votes might bring McCarthy below 218 votes in support of his speaker bid.

Liz Cheney could overtake Kevin McCarthy if she gets all house dem votes and McCarthy loses five GOP votes. the speaker simply needs to earn a majority of votes cast “for a person by name.” if 5 legislators decide not to vote at all or vote “present,” only 208 votes of the 415 votes cast would be needed for a speaker to be elected. 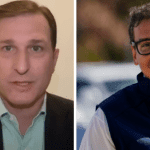