photos published by the New York Times shows guests at Donald Trump’s Mar-a-Lago within feet of a storage room containing government documents the former president took with him when he lost the 2022 presidential election.

top secret documents were seized from Trump’s office, located above the grand ballroom. FBI agents in August seized at least one container of top secret files from the office’s closet and other files from the desk drawer

Speaking with host Alex Witt, Oliva Troye — who served as an adviser to former Vice President Mike Pence, was stunned by the national security implications and advised the DOJ to dig deeper into the thousands of Mar-a-Lago visitors who might have had access.

Asked by the MSNBC host, “How dangerous is this” Troye replied, “It’s completely reckless. and this is a complete slap in the face for every military intelligence officer that has ever served. It is a betrayal of our entire national security committee community to think that former commander-in-chief did this to us and, when I see these images, actually it pains me.”

“I get physically ill because I think of the potential damage for people out there on the field, potential damage to things that have been in the works for decades,” she continued. “Things that people give their lives for — Fathers, mothers, daughters, sons. I mean, people who have served. That is what I think about.”

“At this point, I would be looking at money trails here,” she advised. “Because how did people not know that this was there? Certainly, someone did. Where did those documents go, where does that lead to, why were they there, and who benefited from this?” 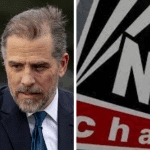