President Joe Biden and President Emmanuel Macron of France shared a smirk when a reporter asked for their reaction to former President Donald Trump’s campaign launch.

On Tuesday night at Mar-a-Lago, Trump made a 2024 presidential campaign announcement in which he promised to MAGAGA (Make America Great and Glorious Again).

while Trump was making the announcement to  the captive audience, President Biden was attending the g20 conference in Indonesia with a host of other world leaders.

While touring the Hutan Mangrove Forrest in Indonesia, New York Times White House correspondent Katie Rogers asked both Biden and Macron to weigh in on the announcement.

POTUS chatted with President Emmanuel Macron of France, whom he stayed close to for the rest of their tour.

“My granddaughter is getting married in four days,” he said to an official who approached him to talk about his family.

“Is this part of a larger body? Is it man made?” he asked a group of officials.

“I don’t know,” one of them replied. Macron and others then became very concerned about the answer to the question. Eventually someone found an Indonesian official who told the group that the water they were looking at was meant to feed the mangroves.

POTUS joked with some journalists before they began asking questions: “You’ve got some real nice biceps,” he told a cameraman at one point.

Pooler then asked POTUS and Macron if they had a reaction to Trump announcing a run. They looked at it other briefly and shared the faintest of smirks. Let’s call it a faint smile.

“Not really,” POTUS said, before turning his attention back to the mangroves. Macron stayed silent and did not respond to a question about his reaction on Trump. 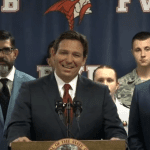